One of the top agents in Sotheby's International Realty's Montecito office, Caroline Santandrea is in the unique position to help buyers and sellers with properties in both the Santa Barbara/Montecito and Ojai Valley areas, because she has lived for several years in both communities and is a member of both Boards of Realtors.

Caroline became a Realtor because she has a passion for houses, from Santa Barbara's Spanish Revival styles of the 1920s and 1930s to state-of-the-art contemporaries. She brings an extensive knowledge of architecture and interior design to her real estate profession after studying both in her native London. Besides her appreciation of homes with historical or architectural interest, Caroline loves land and has the experience and knowledge to represent buyers and sellers with building parcels, equestrian estates, ranches and farms.

Prior to becoming a Realtor, Caroline was Creative Director of an international advertising agency. Her strong promotional and writing skills are put to good use in the creative marketing of properties.

She has also acted as general contractor and decorator on several major remodeling projects on both the East and West Coasts, and she has accumulated years of experience in making old or tired houses work for the modern day. Her understanding of floor plans and materials combined with her knowledge of local contractors helps buyers plan their construction projects.

She has coordinated stories for major home magazines and television networks in the US and Europe including Martha Stewart Living, House and Garden and HGTV. Her previous and current homes have been featured in several style magazines and on the HGTV series Homes Across America

Most of her business comes from referrals, and she enjoys ongoing relationships with many clients.

"We have successfully completed so many complicated real estate transactions together, because you are always one step ahead of the game".

"You made Santa Barbara happen for us, and now we never want to leave!".

"Because of your contacts, you sold our home before we even put it on the market, and it doesn't get better than that!".

"We hired a realtor and found a friend.". 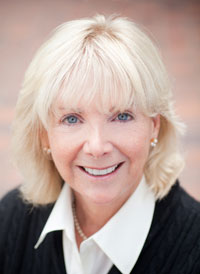